New Release — Jaime Johnesee’s The MisAdventures of Bob the Zombie 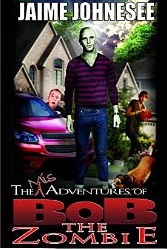 Prolific Horror/Comedy novelist, Jaime Johnesee has released the newest book in the Undead Bob series — The Misadventures of Bob the Zombie. The Fourth novel of the funny-as-death series puts a comedic spin on zombies and Bob’s attempt to be a normal undead guy in a warm-blooded dominated society.

Here’s the synopsis —-  Bob is an ordinary guy. He likes classic rock, a good party, and tacos. It’s too bad that he is dead. Well, technically speaking, Bob is undead. After an accident claimed his life his mother couldn’t bear to bury him. A quick call to a necromancer fixed that problem and, voila…he was reborn!

Armed with a quick wit, a sharp intellect, some good friends, and his trusty stapler, Bob embarks on some crazy adventures that will make you laugh, make you cringe, and –most importantly– make you cheer for Bob to have a happy ending.

← 50 Shades of Fan Fiction (or am I a book snob?)
THE MANY FACES OF ENVIRONMENTALISM →