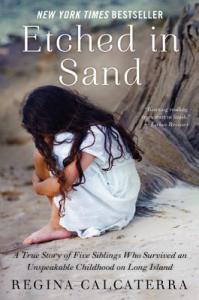 Regina Calcaterra could have turned out very differently.

The third of five children, Regina and her siblings were forced to scrabble a life together when Cookie — their mentally ill, alcoholic mother — went on weeks- or months-long binges, leaving her four daughters and son to fend for themselves.

Little to no food. Shelter — until a landlord gets wise to the fact that his tenant isn’t paying . . . and has abandoned her kids at his rundown apartment, where they live like warriors forced to steal to survive. The clothes on their backs and, if they’re lucky, a television set to entertain the little ones.

No more. No less. For years.

Though she thinks there are people who want to help them, Regina fears what has already come to pass before: being shoved into foster care, where she will be unable to look after siblings — especially Rosie…