Listen to “Stonewiser: The Lament of the Stone” Book 3 *** Written by: Dora Machado *** Narrated by: Melissa Reizian Frank 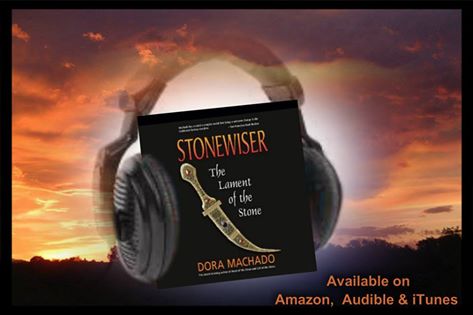 In her most dangerous adventure yet, Sariah, the rogue stonewiser who defied the all- powerful Guild, and Kael, the rebel leader who against all odds loves her, must find a stolen child, the only one capable of setting rule upon chaos, preserving the future of stonewising and defeating the rot ravaging the land. The stakes couldn’t be higher. The coveted child they seek is an abomination. He is also their son.

In a journey fraught with surprising twists, Sariah and Kael must do more than unravel the mystifying forces vying to control their lives, discover the mysteries of ages past and defeat the unfathomable powers of the mysterious rival deity pledged to destroy the goddess and eradicate stonewising from the land. They must challenge the stones, defy the goddess and confront their cursed fates. Because only by embracing their destinies do they stand a chance to save their child and their world.

← Are we living in the a good dimension? Visit Irene Helenowski’s blog to find out!
The Chronicles of Marithe Series by Patrick O’Scheen →

One comment on “Listen to “Stonewiser: The Lament of the Stone” Book 3 *** Written by: Dora Machado *** Narrated by: Melissa Reizian Frank”