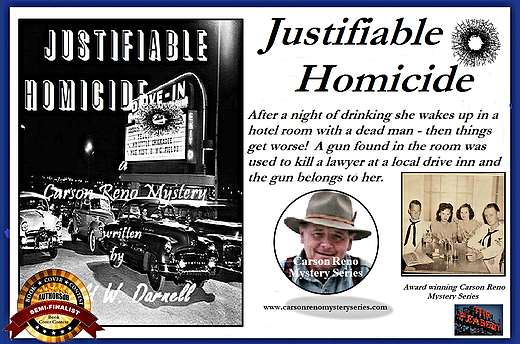 All Carson Reno Mystery Series Books are standalone novels. It is not necessary to read them in any particular order.
After a night of drinking, she wakes up in a hotel room with a dead man but claims no memory of the previous night’s events. However, a gun found in the hotel room was used for another murder – used to kill a lawyer at the local Drive Inn Theater. Then…things get worse!
The murder gun belongs to his client’s husband and has her fingerprints all over it. The dead lawyer was blackmailing her and witnesses saw her at both murder scenes.
Interesting and dangerous characters surface, and somehow events from World War Two are playing a part in the mystery. To prove his client innocent, Carson must unravel a complex blackmail scheme and explain a few murders.
Follow Carson as he chases clues trying to solve this old fashion…